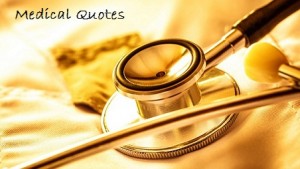 „The human body is the only machine for which there are no spare parts.”

„To eat is human, to digest is divine.”

„Some drugs have been appropriately called „wonder drugs” in as much as one wonders what they will do next.”

„A fashionable surgeon, like a pelican, can be recognized by the size of his bill.”

„Nature has given man one tongue, but two ears, that we may hear twice as much as we speak.”

„The place where optimism most flourishes is the lunatic asylum.”

„I die by the help of too many physicians.”

„Life is a fatal complaint, and an eminently contagious one.”

„Love is like the measles; we all have to go through it.”

„No man should marry until he has studied anatomy and dissected at least one woman.”

„Medicine would be the ideal profession if it did not involve giving pain.”